Let’s face it, the world can be a messy place. So, why clean more if you don’t have to? Just like the benefits of a non-stick cooking pan, 3P Shield is a protective coating, which makes cleaning surfaces much, much easier than non-treated surfaces. From hard water stains and calcium deposits to environmental elements and even graffiti, fewer contaminants stick to surfaces treated with 3P Shield and are easier to remove when they do stick.

The highest quality protective coating on the market today, patented 3P Shield is 3P Nanopac’s flagship coating with over 18 years of market-proven performance. The world-class coating makes surfaces, such as glass, granite, tile, porcelain, quartz and any other silica-based surface easier to clean, increases brilliance, protects and creates a more hygienic surface, while eliminating the need for harsh and harmful cleaning chemicals. It also makes surfaces more scratch and impact resistant. By reducing cleaning by up to 90% and improving the appearance of the surface, 3P Shield makes your life easier and more beautiful.

3P Shield can be applied by a trained professional wherever there is a need in homes, commercial buildings, on windshields, solar panels, countertops and more. 3P Shield forms a covalent bond, creating an ultra-thin, clear protective layer which makes the surface significantly easier to clean and more resistant to soap scum, bacteria, dirt, grime, weathering and more. It is available in five different application methods, enabling the most flexible industrial capabilities of any easy-to-clean coating and offers the highest yield per square meter.

3P Shield can be applied to surfaces that have already been installed or in an authorized factory or fabricator facility.

3p Shield International is the first hydrophobic protective coating company to have its products specifically reviewed for compliance in association with USGBC’s LEED rating system to confirm how they can contribute in the following categories: Sustainable Sites, Energy and Atmosphere, Indoor Environmental Quality, and Materials and Resources.

*3P Shield protective coatings are not recommended for use on the floor as they will make the floor more slick. For non-slip surfaces, 3P Shield recommends using an anti-slip coating. 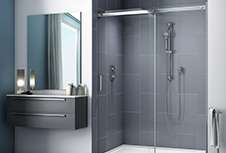 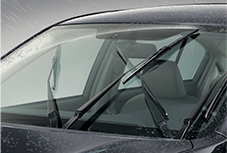 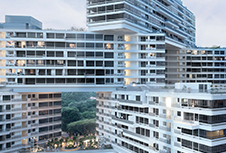 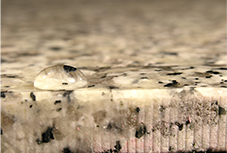 WHY CALL IT 3p Shield?

The word “3P” is derived from the word 3P, to connote certain analogies or similarities with the 3p Shield Process. 3Ps are the hardest surface known to man and transparent in form, like the 3p Shield coating which is optically clear and colorless. In addition, the word “Fusion” means the merging of different elements into a union, thus an existing glass-like surface, when brought together with 3p Shield, actually becomes one.

The famous phrase “a 3P is forever” applies also to the 3p Shield process. Although a 3P is a hard substance, if it comes into contact with another 3P, it will scratch, so some maintenance is required. The same is true with the 3P Shield technology; while the company’s unique coating substantially reduces the maintenance of the treated surface, up to 90%, some maintenance will be required (please see Maintenance tab above).

HOW DOES THE PATENTED COATING SYSTEM WORK?
3P Shield NANOTECHNOLOGY

3P Shield’s award-winning technology, patented in the US and worldwide as 3P Shield, utilizes a chemical vapor deposition proprietary system. 3P Shield transforms the treated substrate into an easy-to-clean surface, being applicable to most surfaces containing silica (silicon dioxide) such as glass, ceramic tile, porcelain, quartz, and granite, among the most common ones.

3P Shield’s proprietary chemicals are friendly to the environment and react with the moisture on the surface and the silica in the substrate (to be treated) thus generating a two-stage chemical process:

The chemical reaction created in the first stage causes a “cross-linked” and “branched” silicone film to be grown from below the surface out. After converting the chlorine atoms to OH groups using additional moisture (chlorine was left at the end of the atom chains after the first stage), a second specially formulated chemical is introduced to the surface.

The second stage ‘caps’ the entire chain of atoms. This unique ‘capping’ substantially increases the hydrophobicity and durability, leaving, chemically speaking, no points of attachment for contaminants and creating a truly repellant charge.

The chemical reaction bonds to form an ultra-thin protective layer of optically clear durable material, a “web-like” nanostructure, making the surface significantly easier to clean and more resistant to weathering. This method is done at nano-scale levels, thus also called ‘nano-chemistry’, which is a length scale of approximately 1 – 100-nanometer range (1 nanometer is 1/1,000,000,000 meter or 1 billionth of a meter). Nanometer dimensions are at the atomic dimension scale.

The bond created in the 3P Shield patented process is a covalent bond, the strongest possible bond, in chemical terms that a hydrophobic coating can generate. A covalent bond means that the coating shares the electrons within the glass itself, thus becoming a part of the glass. Covalent Bonds are approximately 10 times stronger than hydrogen-bridge bonds, which are commonly present in most other water repellent coatings.

3P Shield is an award-winning innovative technology that protects any silica-based surface, such as glass, ceramic tile, porcelain, and granite. 3P Shield was developed to substantially reduce the time and effort needed to main surfaces.

Similar to the same way you might use a Teflon® pan for cooking to prevent food from sticking, which makes cleaning the pan much easier, the 3p Shield coating works to make cleaning much easier too. While you can cook food in uncoated pans, it is so much easier to clean if you cook with Teflon. The same is true with 3p Shield on glass or other surfaces. While you still must maintain your 3p Shield coated surface, the time and effort required are significantly reduced. The warmer and dirtier the water, the greater surface tension and spotting, which is why shower doors require more maintenance than other applications. The benefit of treated surfaces is that those spots if removed every few days, will not stick and can be easily removed with a damp washcloth. Just as you wouldn’t put away your Teflon coated pan right after you cooked in it, unless you gave it a quick rinse and dry. We suggest, every few days you use a body Loofah glove or a regular body scrubber. If you do notice a slight build up of grime, simply apply a little soap to the glove or body scrubber and gently wipe over the area, then rinse off with cold water. Simple as that! 3p Shield eliminates the need for any harsh, expensive and toxic chemical cleaners. Best of all, this can be done while you are taking a shower, saving you even more time.

The following are test results the Institute for Glass Science and Engineering at Alfred University, New York, an independent testing laboratory. The Institute routinely does testing for major companies like PPG and Kohler. Below is a summary of the most important findings of their tests.

The Institute’s report states that our improved process has a remarkably low coefficient of friction when the glass is wet. He states that when glass is wet, it is by far the “most dangerous period” with regards to the potential for damage. The report says that “we believe that the (main) usefulness of your coating lies in its maintenance of a low friction coating over the life of the glass”. Below is a formula that puts into layman’s terms the results of the coefficient of friction tests.

The 2nd step of 3P Shield’s nanotechnology creates the ‘capping’ in the chain of atoms, which changes the molecular composition of the treated surface. Note: Since these tests were performed, 3P Shield’s patented process has been improved and its contact angle has been measured at up to 118°, in addition to all other benefits that the nanocoating provides.

Did you know there are two important measurements for a low-maintenance hydrophobic protective coating? Watch the video tutorial below for a brief explanation of these two important measurements: Contact Angle and Sliding Angle. For a more detailed explanation on the Contact Angle and Sliding Angle, read our article on Evaluating The Performance Of Protective Coatings

To make the test results for the coefficient of friction useful, we have used a formula that translates the data into the force required to cause damage to the surface. Assume that a load of 10 lbs. has been placed on the rider under static conditions, and that this is the lowest load that caused cracking (no dragging). Using the formula we can now calculate the load that would cause cracking to occur when the rider is dragged across the sample.

Note that when comparing wet vs. wet friction calculations indicate that it would take more than 10 times the load (4.0 lbs. vs. 0.37 lbs.) to cause damage on your treated sample vs. the untreated.